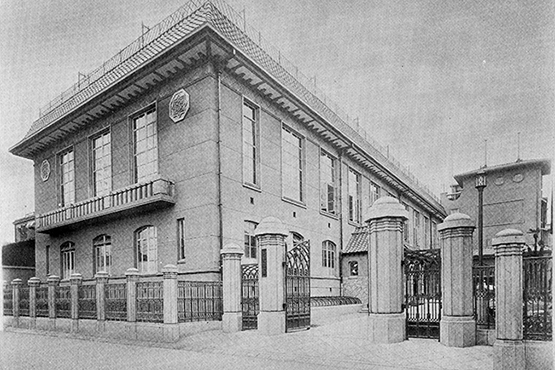 This school was named Meirin because Meirin-sha, a training hall of moral philosophy called Sekimon-shingaku was used as a school building.
The main gate of the building used to face Nishiki-koji Street at Uradeyama-cho. However, a land lot at Yamabushi-cho was purchased in 1875 and its main gate was relocated on Muromachi Street side. Later additional land lot at Tearaimizu-cho was purchased, and the current school compound was created then.
Today, the original building is not there anymore. However, the remnant of the old gate is seen on Nishiki-koji Street side. The school district prospered because of clothes wholesale business. Painters and pot makers used to live there. Since the community residents were interested in culture and education, they supported Meirin Elementary School because of their warm sympathy towards the children. Many artworks created by artists such as Taizo Minagawa, Ohkoku Konoshima, and Keigetu Kikuchi were donated by the artists themselves, the graduates of this school and the local people. At present, these art works are stored at Kyoto City School History Museum.

The school building seen today was thoroughly renovated in 1931. At that time, steel frame was a cutting edge technology and this technology was used for the renovation. Its design was created by the Building Repair Section of Kyoto City. The reddish cream color of its outer walls, the Spanish style orange color of the roof tiles and the green gutters gives a warm atmosphere to the building. Since many Yamaboko-cho communities of Gion Festival are located in this school district, the design of the front portion of the building is believed to have been influenced by Yamaboko floats.
Some of the characteristics of this building are: the elegant auditorium, the 78 tatami mats wide grand chamber with coffered ceiling and the Japanese room on the roof top. Also the banisters, ornaments on the outer walls and the circle windows are must-see spots. North annex has a slope at the entrance which is convenient for bringing in and out parcels and for evacuation.

Renovation of the building of Kyoto Art Center was done while maintaining its appearance as far as possible.
The auditorium, grand chamber, Japanese room “Meirin” and class rooms are open to public only when some events are held there. However, only visiting the library, tea corner or the corridors will let you feel the atmosphere of this building.
Meirin Elementary School has been cherished by the local residents for a long time and is still attracting many people as a place for study, creative activities and relaxation.